Leadership Roanoke Valley (LRV) is a program established by the Roanoke Regional Chamber of Commerce in 1983 to encourage community leadership.

Each year about 30 applicants are accepted for the prestigious 10-month program, representing various businesses, organizations, educational institutions, and government agencies.

The monthly educational sessions that make up the program are developed and implemented by the participants themselves, along with advisors and program consultants. They involve economic development, quality of life, community involvement, and regional “hot topics.” The program offers opportunities to meet and interact with local, state, and national leaders.

The Leadership Roanoke Valley group spent the day a Vinton on November 20 getting acquainted with the town.

Vinton Director of Community Programs and Facilities Chasity Barbour is a graduate of the LRV program and now an advisor. Tim Cerebe is this year’s LRV chairman.

Barbour has said that the LRV class opened her eyes to the whole region and allowed her to network with leaders from around the valley and the state. It helped her to better comprehend how economic development decisions are made, emphasized the benefits of regional cooperation and coordination, and also gave her the opportunity to showcase the Town of Vinton.

On November 20, the group started the day with presentations at the Vinton War Memorial, then took a tour of Vinton landmarks, before finishing up at Twin Creeks Brewing Company to hear from two dynamic Vinton personalities: Annette Patterson of The Advancement Foundation (TAF) and Kat Pascal, co-owner of Farmburguesa restaurant. They both spoke to the LRV group about their personal change stories and how “change in you can impact the community.”

Patterson said that when asked to speak about changes and transition in her own life, three words came to mind—“courage,” “determination,” and “collaboration.”

In 2004, in her 30s, with a well-established career in higher education, she experienced a “midlife crisis.” She told her husband she wanted to quit her job– which she did– and established the non-profit TAF in 2007, during one of the worst economies of modern times. She founded TAF on the “Stone Soup” folk tale– if everyone contributes what they have, virtually anything can be accomplished.

Patterson says it took courage and a huge leap of faith to leave her job and start the non-profit; however, the move enabled her to take her higher education background and apply it to community development, impacting countless lives in the region.

The Advancement Foundation has expanded by leaps and bounds, and is recognized throughout the region and state for its game-changing and life-changing approach to partnering community and economic development.

TAF programs such as the annual Gauntlet Business Program and competition for fledgling entrepreneurs help to “level the playing field” and break down barriers for future businessmen and women.

Patterson said beginning TAF during a “horrible economy was scary.” She had to learn “to pivot” and to take some risks.

As for collaboration, she learned “you can’t do it alone,” “you don’t have all the answers,” and the importance of “finding partners and shoring each other up on the journey.” She had to identify her own strengths and balance them with those of others she would work with.

Her work with TAF has never been a “straight shot.” She advised the LRV participants to prepare to “make lemonade out of lemons,” be resilient, and when you meet an obstacle be prepared to change paths.

“To be bold and change the world, you can’t be safe all the time,” Patterson said.

Patterson recounted the success story of Twin Creeks Brewing where the LRV was meeting.

Andy Bishop, his brother Jason Bishop, and their friend Barry Robertson had regular jobs and brewed beer in a garage as a hobby. They stepped out to enter the Gauntlet Business Program in 2016 and won first place, enabling them to establish their brewery. They learned to make connections and worked with their landlord and the Town of Vinton to “make their place.” They have essentially revived downtown Vinton and have now expanded to a second location at the historic Brugh Tavern at Explore Park.

Twin Creeks could easily be the poster child for the Gauntlet program.

The initial Gauntlet was held at the Co-Lab in Grandin Village; it settled in Vinton and has now grown to include Vinton, Roanoke County, Roanoke City, Botetourt County, and Alleghany County, and in 2020 is adding Rockbridge County to the group.

Kat Pascal of Farmburguesa has also been a Gauntlet participant. She told the LRV group that she has learned failure is a part of life and to be expected as you get started in business. You can’t stop at the first “no.”  You have to learn to bounce back quickly, find the humor, find mentors who believe in you, and press on with your dreams.

It took five years for Pascal and partner Jimmy Delgado to get their Spotless America commercial cleaning business off the ground, which gave them the financial well-being to make their ultimate dream of owning a restaurant possible.

Spotless America remains their “bread and butter” business with 30 employees.

Pascal and Delgado met at age 19 and realized they shared an “entrepreneurial spirit.” They were young and began their family young. They became entrepreneurs at age 25.

Pascal talked to the LRV group about the importance of being able to adapt to change and “roll with the punches.” She became a member of the corporate banking world in her teens and found she had the skills and the drive to succeed. She and Delgado identified the specific skills they needed and set out to acquire them.

An important step in bringing their restaurant dream to fruition was collaborating with the Town of Vinton and the Gauntlet program two years ago to open Farmburguesa with a second location now in the works in Grandin Village.

Pascal said connections are paramount. They ended up opening the Vinton Farmburguesa through connections with a Spotless America client. They completed extensive renovations on a tiny and not-very inviting space at the time on Pollard Street, but one that presented a “charming opportunity.”

Pascal says one challenge everyone faces is balancing personal life and work life. You need to be reflective and give yourself credit for “doing the best you can.” With your family, you need to have patience and understanding and “be kind to one another.”

Four months ago, Pascal partnered with Diane Simmons of “Simply Fitness” to give back to the community with “Burgers and Bootcamp,” a monthly program which combines exercise, health coaching, and healthy eating— another effort to maintain balance and health in busy lives.

The consensus was that the day in Vinton was well spent. 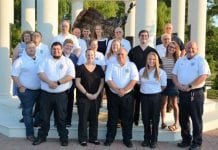 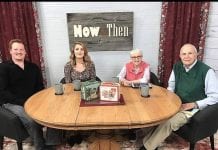 “Now and Then,” a conversation between generations, now showing on PBS 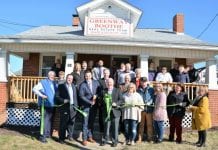 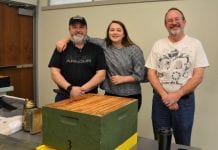 Library patrons learn if they are cut out to keep bees 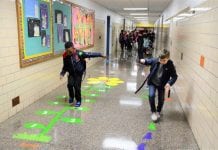 Sensory paths at HLH exercise the brain and the body 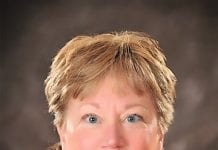