It is said that music soothes the soul. That recently proved true as bands and choirs brought an evening of worship and ministry last Sunday in Craig County.

On November 3, many gathered at Mountain View Church for the Ministers Association Third Annual Singspiration, a fundraiser for the ministry which is used to help local families.

Many enjoyed seeing friends and catching up. Pastor Jonathan Lee, the event’s emcee, tried to get everyone’s attention, which took much effort due to the happy chatter of everyone.

Pastor Kenny Davis opened with prayer and the evening started with Mountain Views Joyful Noise. “We’re not a choir, but we do make a joyful noise, so that’s what we are calling ourselves,” Karen Taylor said. They began with beautiful songs, Let there be Joy in this Place and The Days of Elijah.

Alyssa Schulke, music teacher for Craig County Schools, followed with a melodic rendition of the song, How Great Thou Art, accompanied on the piano by Jeannie Guthrie.

Lee shared that Guthrie was his fifth-grade teacher and was greatly appreciative of the patriotic and religious songs that he learned in her classroom.

The Crossroads Strings from Crossroads Church was joined by Clarissa Shepherd, and accompanied by Jennifer Crawford (who was sporting her Green Bay Packers shirt in support of her grandson who plays for the team).

Among their songs was also How Great Thou Art. “This is the redneck version,” they said. They then played a ukulele, autoharp, guitar and drum box. Their song On the Wings of a Snow-White Dove had many singing along, as well as their heads bobbing to the beat.

During intermission, communion was served. The moving songs “Only Three Nails and Two Pieces of Wood”  and “A Rugged Cross Jesus Built a Bridge” were played and sang. A special offering was taken up for the Ministers Association.

Davis also reported of how last year’s offering was used. “We were able to help many families with the offering last year,” he said as he shared a long-detailed list.

Ike Craft sang several songs, including “God Sent An Angel” and “I Believe in a Hill called Mt. Calvary.”

Jim McDaniel played bass, while Linda Early Diane Early both sang and played the guitar to many favorite hymns such as “The Man in the Middle” and “Four Days Late.”

The Bluegrass Gospel group Newport Road had many instruments that added to the great evening’s delight: a bass, cello, banjo, mandolin and a guitar. “We call ourselves Newport Road because we live on Newport Road,” they shared with a laugh. Some of their songs included: Crying Holy to the Lord, Mansions in the Sky and Old Country Church.

The group announced that on December 8 at 3 p.m., they will be playing at Catawba Hospital for their 13th Annual Operation Santa Claus. “We play all Christmas music and the funds raised go towards gifts for the patients at the hospital.”

The Redeemers brought their own songs and jokes as well; Glory to God He Set Me Free, Let My Life be a Light and Leaning on the Everlasting Arms.

The last singing was introduced as Randy Dudding and his group. With a little joking between brothers and friends, they played and sang many songs everyone enjoyed. They started out with Long Black Train and then Three Rusty Nails and an old Dogwood Tree. They played a few more and ended with I Saw the Light as people participated.

Lee ended by sharing that it was a great evening of music and fellowship. He invited everyone to stay for some snacks afterward. “I’m always amazed at how much talent we have in our backyard,” Lee said. “Plus, the gifts that were given show how people in our community truly care about helping their neighbors. The whole night reminded me of how blessed we are to live here.”

Nearly everyone went back for seconds and even thirds as the special foods fixed were delicious.

Claudia Huffman encouraged people to have ‘just one more’ as she took platters around to people. “It’s difficult to say no when you bring it to me,” she said.

With a record donation of $2,000 and an evening of almost three hours of great music, it seemed that everyone left full of joy in fellowship and good food.

“I would like to thank all who attended the gospel sing, the musicians who gave their time and talent to provide the wonderful music and a special thank you to everyone for the generous donation,” Pastor Kenny Davis said before adding, “The night wasn’t just about raising money, but about Christian fellowship and the uplifting songs that were shared that glorified our Heavenly Father. I hope that everyone left spiritually renewed and blessed by what they heard. May God richly bless you in your lives.” 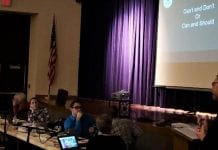 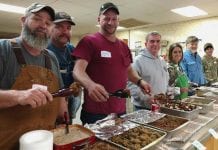 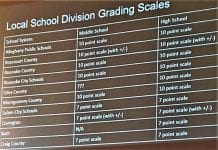 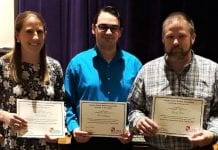 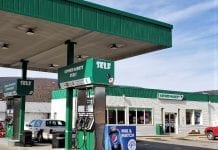