Thirteen miles – easy in a vehicle, on a bike or on a horse, but try running it. These days many people are changing their lifestyle, utilizing the outdoors and keeping the CDC happy. What is changing is the mindset of folks who had to change their normal daily routine into a more active lifestyle. Whether they are kayaking, fishing, hiking, biking, or running, they are doing it and that’s a good thing.
This year, Tucker County held its annual half marathon, a brutal 13 mile jaunt that can drive even the best runners to madness. Only a select few runners who have made running a passion entered the race with fifty-eight runners from all over the country participating. Due to the Covid-19 issue, the run had a different timing system, but it didn’t keep it from taking place. The chance of rain didn’t put a damper on the event, and the weather cooperated for the most part. Most people set lofty and sometimes unreachable goals to limit the possibility of ever reaching them so that if they are not gained, it’s not a problem because it was impossible in the first place. Then there are those that set goals and put in the daily hours of grueling workouts to reach their goal. Running a half marathon, or rather finishing, is only accomplished by those that put in the time.
So, what’s the point? As time rolls on, a person’s body gets rusty and useless, covered with a blanket of gray hair and brittle bones? Having a goal strengthens the resolve that nothing will get in the way of doing what we want to do rather than doing what we have to do every day. Sometimes it’s time to get out of the box, live and feel the exhilaration; when a challenge is given, accept it and do the best you can. It’s motivation and drive that keeps our mind clear and focused and reminds us that the easy chair is not the ultimate goal.
Geoff Hamrick took the 13 mile challenge and put it in its place, finishing the event in second place overall with a time of 1:44:41.7, just 0:15 behind the leader. He is an example of hard work and determination to out stave off old age. He has been seen running on the roads, over hills and on the trail, and some might even say on top of buildings, but always running and staying just ahead of gray hair. He placed 2nd overall and 1st in his age group. There are many others in this county that run or have taken up the sport. It isn’t for everybody, but for those that do it, it is a personal challenge and a life preserver for that individual. Without challenges, we fade and dirt will eventually cover us up with no story to tell. Nothing will ever get accomplished with arms folded and legs crossed except boredom.
Congratulations to Geoff Hamrick on a great run! 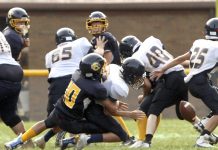 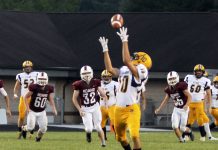 Panthers win a tough one on the road 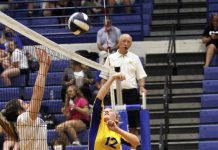 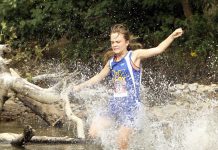 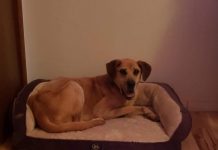 From Lost and Scared to Found and Loved 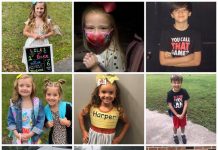 School Back In Session for Clay County