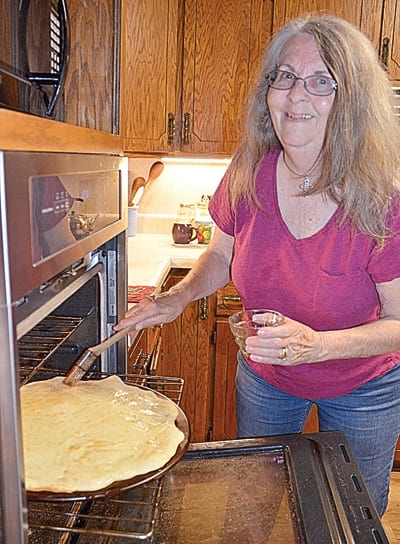 Waiting for the flat, round bread to come out of the oven, Susan Arbogast and I sit in her spacious and homey kitchen and talk about her bread making experiences.

“Until about a year ago, I made bread all the time,” Susan said.

She specialized in whole wheat bread, making it with special Montana hard red wheat berries which she ground herself.

“Then the funniest thing happened…” she said.

But before she could finish that sentence, our conversation was interrupted by the aroma of the bread, letting Susan know it was time to check it.

The bread – like all bread fresh out of an oven –filled the room with a wonderful scent.

Looking like a large pita bread, the Middle Eastern bread is slightly browned, almost perfectly round and features a topographic surface – with little “hills and valleys” bubbled across its surface.

Susan brushes it gently with olive oil and sprinkles a bit of course salt on top.

She places a pizza stone in the middle of the table.

When bread comes out of the oven, it’s time to eat.

Susan graciously invited me to have lunch while we talked.

Our bowls were filled with hamburger stew, which was made using Marshall Shinaberry’s recipe that was printed in a recent edition of The Pocahontas Times.

Susan may have had a temporary falling out with bread making, but she’s had nothing but success with her recipe for Middle Eastern bread.

“I started making this bread about ten years ago for Bible School,” Susan remembers.

“The Oak Grove Presbyterian Church and the Metho-dist Charge – which includes the churches in Seebert, Hillsboro, Marvin Chapel and Droop – were having a joint Bible School and, that year, our theme was “The Marketplace – Living Like Jesus.”

“Everyone, including the kids, dressed like they would have in the time of Jesus.

“They learned about food, crafts and the skills that He would have learned as He was growing up.

“The kids came in and got costumed, then they went around to our various booths and experienced different aspects of Middle Eastern life.

“I was in charge of the food, and I found this recipe in the Bible School materials we were using.

“It was so easy to make and everyone loved it.”

“This bread is great for dipping in a stew like this,” Susan said.

Susan’s husband, Sam Arbogast, walks into the kitchen and stops at the table.

“It makes a great snack,” he added, tearing off a piece as he headed out of the kitchen to get back to making hay.

“Sometimes we eat it with butter, and the grandkids like to eat it with jam,” Susan said.

“It tastes great cold, too.”

As we settle down to our delicious lunch, Susan tells me that she grew up as a self-described “Air Force brat.”

She and Sam have been married for 30 years.

They met in Hinton when Sam came to shoe Susan’s horses.

“Sam was my farrier,” she explained with a smile.

The couple is surrounded by history and memories at every turn.

The farm sits right across the road from the farm that belonged to Sam’s grandfather, Walter Arbogast.

Sam’s mother, Arlene Dunn Arbogast, was born in the old farmhouse down the hill from Sam and Susan’s home.

“And the two midwives that attended her birth were her two aunts,” Sam added.

The Arbogasts built their home on the top of a hill, with a commanding view of the surrounding peaks.

The house is named “Rainbow’s End.”

“When we were walking around on the farm and trying to decide where to build our house, a sudden rain shower came up,” Susan explained.

“We ran under the trees and when the rain let up, we looked out and there was a rainbow over the whole farm.  And it bent down and touched the earth right on top of this hill.

“I remember saying to Sam, ‘that’s it. That’s where we’ll build our house.’”

And so they did.

Martha Stewart has nothing on Susan Arbogast.

She cans all manner of vegetables such as tomatoes, beans and beets, and freezes broccoli, peas, corn and blueberries.

She makes applesauce, and she is learning how to keep bees.

She and Sam have several draft horses, one of which is a mare with a new foal.

The view from their home of rolling tree-covered mountaintops gives one the feeling of being on top of the world.

Looking at their farm yard, one could easily mistake the scene for a Currier and Ives print.

Susan has two grown children, Sam has three, and between them, they have 16 grandchildren – “plus one youngster who feels like a grandson” – and two great-grandchildren.

“As I said,” she continued, getting back to her bread baking story, “I like baking bread.

“I’d done it for years. We ground our own wheat and cornmeal.”

She makes biscuits using the recipe from the original Betty Crocker cookbook, “and Sam says they taste just like his mother’s,” Susan said proudly.

It’s rare that Susan doesn’t have blueberry muffins, cornbread, waffles or banana bread ready for visits from the grandchildren.

“He loved his mother’s salt rising bread – she made five loaves every Saturday.

“For years,” Susan began, “even though I was working, I always found time to bake bread.”

“But about a year ago I just stopped baking loaf bread.”

This, gentle readers, is a story that should be of encouragement to anyone who has trouble baking bread and may blame it on inexperience.

“One day, the bread just didn’t turn out well,” Susan stated flatly. “I don’t know why. It just wasn’t up to par.

“I started having trouble every time I’d make bread. I tried different flours and different yeasts.

“So I just gave up making bread for a whole year,” she said, as we tear off another bite of what I’m thinking is the best tasting “pita” bread I’ve ever had.

“But now I’m feeling inspired to start making it again,” she said, smiling.

I’m going to go out on a limb here and say, I think that’s a very good idea.

Something tells me, Susan Arbogast’s got this.

Dissolve yeast in water and mix in olive oil. Stir in flour and salt. Let rise 1 hour. Punch down. It will be gooey. Place the dough on an olive-oiled pizza stone or baking sheet. Spread the dough into a round shape, and pat and stretch it until it is very thin. Bake at 350º for 12-to-15 minutes.

If not brown on top, brush with olive oil and brown under the broiler for a few minutes. Remove from oven and sprinkle course salt on top.

Bread ~ on a ‘knead’ to know basis – Jo Debra Gandee and Jason Long, keeping it all in the family

Fishing for an Artistic Bicentennial