Home News Pocahontas Times A sign for the times

Even if you do not recognize his name, you have probably admired his work.

Terry Hackney and his team at Lens Creek Studio designed and built the signs you see at the overlooks on the Highland Scenic Highway.

In fact, Terry’s interpretive signs can be found throughout Pocahontas County, including the former Mill Point Federal Prison Camp, along the popular Cow Pasture Trail, Cranberry Glades and the Falls of Hills Creek, just to name a few.

I first met Terry and his wife and co-worker, Jodi, when they came to Watoga State Park to conduct an interpretive inventory of the park. This task could accurately be termed a “no stone unturned” investigation into the history, culture and natural resources of the park.

The result was an interpretive plan that can now be utilized by the park to enhance viewsheds with orientation signs, historical information signs, and to create both graphic and topographic maps of trails and other attractions.

This will greatly enhance the visitor’s experience by providing greater meaning to the things that they see in the park. If, for example, hikers are passing by the Workman Cabin and cemetery, they will be able to learn about the lives of the pioneer family that lived, eked out a living from the wilderness and were buried there.

By the same token, a visitor at the TM Cheek overlook will be able to locate other prominent locations such as the Greenbrier River Valley and the various mountains in the background. In addition, they can gain an understanding of the geology and history of the area. All on one well-designed sign.

Terry and Jodi recently joined Ruth Taylor and me for a hike out to the site of the old town of Watoga. Terry had wanted to see the site, as might be expected of someone who makes his living interpreting history.

This was also an opportunity to talk with Terry and Jodi about their fascinating business – a rare combination of historical research, photography, art and architecture. Having seen the wonderful signs and kiosks they create, I wondered how their passion for history was turned into a successful business.

Terry explained that it was his year of working for AmeriCorps that was the impetus.

“I found out that I love the story-telling nature of interpretation, whether it relates to cultural or natural resources,” he said. “I combined my years of first-person interpretation as a Civil War tour guide with my experiences in woodworking and sign fabrication, to create the basis of Lens Creek Studios.

“I’ve always had a passion for new adventures and sharing stories. In 2008, I decided to start a photography business. That changed to photo restoration, so I set out to learn all I could about the restoration process.

“At the time we were living in Confluence, Pennsylvania. My job as a prep cook allowed me to work two seasons as a river photographer on the Youghiogheny River.

“With AmeriCorps, I was assigned to the Rich Mountain Battlefield Foundation for the 2010 – 2011 service year. My first task was to work with the exhibit designer to fabricate the new Civil War exhibit.”

Terry also worked on 12 Civil War Trails markers throughout Randolph and Pocahontas counties. Projects that followed, included designing new interpretive markers for the U.S. Forest Service, as well as an exhibit detailing the 1861 Battle of Greenbrier River at the Bartow Ranger Station.

The road ahead was now clear for Terry.

“From my AmeriCorps experience, I decided that interpretation was my chosen path and Lens Creek Studios was started in early 2012,” he said.

The company’s first project was its largest to date: designing 76 interpretive markers and creating an audio tour for the Highland Scenic Highway. Other projects were to follow, including Watoga State Park, the Cranberry Nature Center and many more. 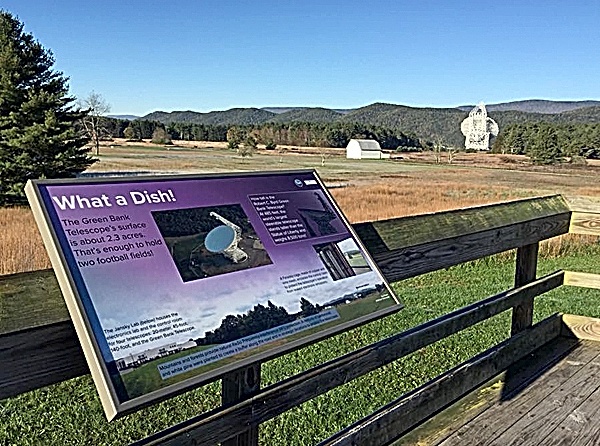 As for how he came to name the company “Lens Creek,” he shared the following story. “Growing up, we’d make a weekly trek to my grandma’s house in the southern coalfields of West Virginia. Us boys would pile into the Rambler station wagon for a five-hour drive over some of the most winding roads in the country.

“At about the halfway point, there was this little diner on top of Lens Creek Mountain, where we’d always beg our dad to stop so we could stretch our legs. I’d usually order a burger and fries, which was a real treat back then. After a while, we’d get back in the car and head down the other side of the mountain toward Grandma’s.

“Twenty years and what seemed to be several lifetimes later, I was driving through the area when I passed an old battered road sign for the village of Lens Creek. All of those happy memories that were etched in my mind came flowing by, just like the little creek for which the mountain was named.”

For Terry, arriving at a name for his new business came along on a string of good memories. And now he and his team help others make good memories.

It is a nice experience to visit a recognized point of interest, say the South Rim of the Grand Canyon as an example. It is a much greater experience, though, when provided with the knowledge of how that breathtaking canyon was formed. We drive away with so much more than just a photograph.

Terry is an affable fellow, quick with a genuine smile and clearly passionate about his work. Those who can make a living out of activities that would otherwise be hobbies are not just “lucky” – people like Terry made these things happen. And the rest of us benefit from his creative products that educate and inform.

It is an informed and educated people that make our country a better place to live – and one more likely to cherish and protect our unique American heritage.

Updates in a changing landscape